Plenty Canada was active in Swaziland from 2015 through 2017 with the grassroots community organization Hope Heals, that provided nutritious meals to those in need, and to enable people living with HIV/AIDS to get anti-retroviral medications closer to their homes and communities. Many of the children who were treated were orphans living with their grandparents in small homes. The soup kitchen project was coordinated by long-time Plenty Canada project manager and partner Mwana Bermudes. Following are project reports from 2015 through 2017. Though Plenty Canada is no longer involved with the project, Sylvia Khuzwayo, the founder of Hope Heals, continues the soup kitchen project initially funded by Plenty Canada. 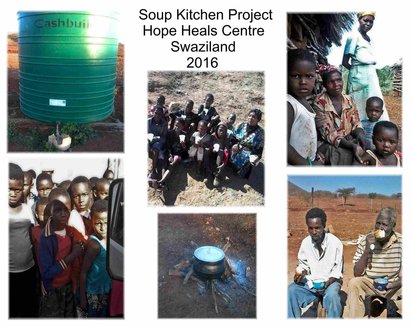 It has been an overwhelming but also a true meaningful experience to say the least, carrying out the Soup Kitchen program on the ground with the realities of working in the rural areas of Africa. Without personal transport and with a limited budget it is a real challenge. Nevertheless, Sylvia has bravely managed to feed regularly between 20 and 30 people since July and that has been a great achievement.

Today I had to travel to one of the worst areas around the Hope Heals Centre that have been affected by the HIV pandemic where some people are suffering from multi-drug-resistant Tuberculosis and of course from starvation caused by the severe drought. I started by visiting two men friends who are both paralyzed and permanently deaf because of the side effects of their heavy medical treatment. They were so grateful that I brought them some cooked food to eat as they were so hungry. One of them wept because he never thought God was touching people somewhere to provide for people like himself.

Then at another place I struggled quite a bit while helping children to fetch water using starving donkeys which are so weak to carry it and travel long distances for the whole day. Poor animals and there is no grass for them to feed on, it's just a question of time before they drop dead like many others. I also visited a family who has gone for days without anything to feed their innocent children who do not understand the plight that is faced by their desperate parents.

Bread, soup and juice was served to them and all who also managed to come. Most of all these people hope that one day things will be fine, what a spirit of courage they manage to keep! One of the mothers was also crying because she did not believe her fortune of receiving something to eat and share it with her children. It was heartbreaking as you can imagine, it turned into a very emotionally draining day for me, seeing people who have had a good normal life at some point and are now not able to walk and cannot hear because of the effects of their sickness.

And again the never ending drought which is hitting them even harder as they cannot provide for themselves and their families from their dried out gardens and with no close by water sources for irrigation. Yet there is not much water available in most of the communities, and all cattle in the area have already perished with only donkeys surviving so far but certainly getting weaker by the day.

The plastic reusable tumblers I have originally bought to serve the soup and juice are not useable anymore due to infection control purposes. The people here are really not well and most have mouth ulcers which can cause more harm than good if we re-use the plastic containers and share among the people, as they are not properly washed and disinfected.

Therefore we have decided to use disposable plates and cups, and I tell each person to wash and keep it for the next serving. This way it is safer as they cannot infect each other anymore with mouth infections.

It is so difficult to talk more about hygiene as water is a luxury to most and one can see in the photos how dirty some of them are. They also cannot afford to buy soap but where there is water they can at least wash themselves with it. This area is really the most affected by this severe drought unlike other parts of this region and we just pray that this year the rain will come abundantly in October and save all this people from starvation."Sylvia writes:
Unfortunately nothing has changed on the situation of hunger and drought. There were small rain showers on Saturday (September 17) but these did not even cause the dry streams to run. The trees are still dying – even the hardiest types – and there is no grass at all.

Most people on ARV medication are stopping taking it as it causes vomiting [if they take it on an empty stomach] as I have explained before. Government interventions are a drop in the ocean and even that is not reaching people in the remote areas where they are most suffering from both drought and hunger.”

Note: We are pleased to be able to report that the rain did finally come in the following months.

Tomorrow I am going to pay for water, not sure when they will deliver for us. Once the water is delivered I will let you know because even where we buy the water you find a list of people who paid first and you also have to wait for your turn in order for the water tanker truck to deliver. Then we will buy the pot and the tumblers for serving the soup. I am trying to put things together and it is the water that is delaying us, however we have begun serving soup to a few members.

Otherwise things are moving and Hope Heals is already making a difference even under these difficult circumstances. These past few days I'm trying my best to sensitize the Hope Heals members about our soup kitchen project kicking off and how they all have to contribute in getting firewood and also helping in turns to prepare the soup. Also discussed how best we can make sure all the people whom we are targeting get the soup and bread. The members suggested that we will sometimes carry out a mobile soup kitchen so we also reach those people who have given up and don't want to be seen in gatherings because of their poverty situation, as some don't even have clothes and have decided to isolate themselves.

I visited some of those families and told them that we will come to them time and again and serve them soup and bread. I did this to make sure they understand our support. Sometimes people who have suffered so much prefer to die in silence. This particular family of 11 members share a one-room hut which is practically falling apart. The mother of the children is HIV positive and she is not doing well on ARVs because sometimes she does not take her medication. In fact lately she hasn't been going to the clinic to pick them up, reason being the distance from where she stays, as she will have to walk 38 kms on foot! This situation has led her to have an increased viral load as she defaults on treatment now and again.

Another reason being that sometimes they stay up to four days without eating anything at all, and that causes her to vomit when she takes her ARVs on an empty stomach. The youngest of her children is one year old and she was born at home as the mother did not have the means to go to the hospital to have the baby delivered there. The baby was tested for HIV when 6 weeks old however she was HIV negative when she was born, but due to her mother breastfeeding the baby she is now HIV positive.
June 2015 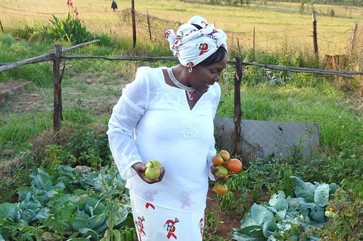 Ongoing Work: Growth Beyond the Garden
​
Our most recent efforts have been concentrated in Swaziland, South Africa. Sylvia Khuzwayo is an inspiring leader and a partner of Plenty Canada, who has played a critical role in reducing HIV and AIDS rates in her community by more than 20%. We are proud to support Sylvia through her Hope Heals initiatives. Our combined efforts have provided orphans in her community with access to fresh, nutritious food, safe drinking water, and education, which would otherwise be inaccessible. She is also working tirelessly to provide education to all community members about HIV and AIDS, including assistance with and access to antiviral medications.

Together, we have constructed a garden that enables orphans and community members affected by HIV and AIDS to come together, share their grief, and provide hope and strength to one another. This garden serves as a safe space for community members. It is an essential component in the development of life skills, including the cultivation and harvesting of crops, for the affected youth.

The garden has proven to be the lifeblood of this community. It is our mission to continue supporting the maintenance and improvements of the current garden and to provide Sylvia with the resources that she requires to carry out this important work in additional communities. 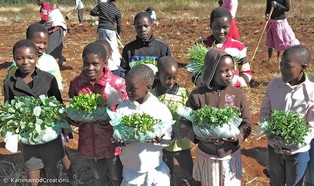